NEGAUNEE, MI – 3/9/2015 – With the regular seasons come & gone, it’s already time for some reflection.  The coaches have gotten together and voted on who they felt stood out most throughout the course of the season.  Here are the Miners who Mid-Peninsula Conference coaches felt stood out!

Congrats to those Miners who were recognized for their great play.  Keep up the good work! 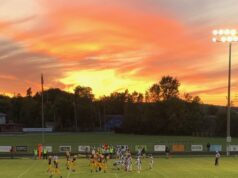 The Negaunee Miners Travel to Face the Houghton Gremlins Tonight on Sunny 101.9