Marquette, MI  –  On Tuesday evening, Smile FM’s Morning Espresso Hometown Tour Team arrived in Marquette. Their first stop, of course, was Border Grill (because you can’t get Border Sauce in Detroit). Once you have Border Grill Border Sauce, you’ll drive for miles for it – just like the Smile team did!

However, upon exiting the Smile FM Sprinter, the team heard a hissing sound. Oh, no! They had a flat! They called up Luke Noordyk for a bit of advice on who to call on a weeknight evening for tire service.

Luke steered them toward Walmart’s Tire Service and they were able to accommodate the Smile Team, even though that Smile FM Sprinter is a big vehicle!

The Smile Team did eventually get back to Border Grill after they got their tire fixed, and the team said it just goes to show you that people in Marquette are so nice.

Smile FM at 88.3 on the radio dial broadcasts their signal on the Great Lakes Radio tower on 510. Since this is such a high structure, Smile’s signal scoots right over Mt. Arvon, Michigan’s highest natural land point into the city of Calumet, where the smile team kicked off the Hometown Tour. Wednesday morning, the Smile team was at the Fifth& Elm Coffee Shop in Calumet.

Co-owner and morning show host, Jenn Czelada was on air along with Biblical Brainiac Brian Dumont, doing a live broadcast of their show on 24 stations across Michigan from the front window of Babycakes.

This afternoon, the Smile Sprinter will travel to Munising for a broadcast from the Falling Rock Cafe, which is on the main drag in Michigan, right across from the Navigator Restaurant, where WQXO’s studios are.

This evening, the team will travel to Cadillac and do their show tomorrow morning from 7a to 10a at West End Coffee & Tea.

Another interesting side note, the Smile team stayed in downtown Negaunee at the Train Depot Bed & Breakfast right by the VFW post. This restored building is an historic site that seems like you’re walking into the past. Jenn said it was so nice to stay at a family friendly historic bed and breakfast rather than one of the chain hotels.

All in all, the Smile team told Major Discount it was a “thumbs up tour” in the U.P. 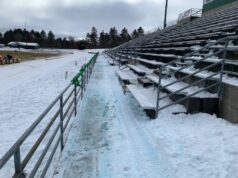