Negaunee, Michigan– 02/01/2018– The Negaunee Miners Boys basketball team stayed home this Thursday night to take on the Gwinn ModelTowners. The Miners came into this game 5-8 while the ModelTowners were 3-10. Jesse Anderson and Brady Guilbault brought you all of the play-by-play action on Sunny FM.

The Negaunee Miners win the tip-off to start the game. Caleb Anderson made the first two points of the game for the ModelTowners. Negaunee was slow to start off offensively. Drew DuShane scored the first two points for the Miners. Drew DuShane did a great job defending and distracting Tucker Taylor. Jason Waterman, Miner, broke the tie before the buzzer making the score at the end of one 10-8 as the Miners led the ModelTowners. The Miners started to pick up from their slow start in the first quarter into the second quarter. Gwinn was getting frustrated with some foul trouble and it showed through some sloppy shots. Jakson Sager, Miner, had a lot of confidence in his plays coming off of a winning game and it showed. The boys had good quality chances for passes and they did a good job taking those chances. Gwinn were only able to get two points throughout the second quarter. 29-10 was the score at the end of two as the Miners held the lead.

The Miners had another good quarter throughout the third. Austin Forbes, ModelTowner, was fouled out of the game and that really gave the Miners an advantage as he was a top player for Gwinn. Jacob Ennet and Jason Waterman were the two scorers in the third for Negaunee. They held the lead and at the end of the third the score was 40-17. The fourth quarter was when the ModelTowners started to fight back and they weren’t stingy with their three pointers. Jake Larson, Jason Waterman, Jacob Ennett, Theo Kumpula, and Keegan Erva held their own and scored for the Miners in the fourth quarter. After a tough fourth quarter and Tucker Taylor, ModelTowner, having a four point play, the Miners were victorious over the ModelTowners 57-37. 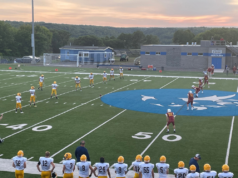