Home Featured Posts Fun On the Ice With the Marquette Township Catch the Vision 3...

Marquette, MI  –  February 27, 2016  –  As promised, the weather held out for us during the Catch the Vision Street Hockey 3 on 3 Tournament this morning. With the ice soft from the sun the last few days, the tournament quickly turned into a boot hockey tournament to keep the ice prime for playing on!

Lions Park was full of community members who came out to play. Many of the participants had never played boot hockey before, so it was a new experience for most of them! With all six of the 3-man teams registered and ready, the first set of games picked up just after 9 am. The first match was Team Legion vs the Executors. The One Times played against The Scott Huber Agency at the same time with Legion and The One Times advancing out of that round.

With one round elimination, the teams played their hearts out during the two 10-minute periods of each game. Participants raced back and forth across the ice, not always on their feet! The crowd got a kick out of the players crossing the ice with nothing but a stick and boots. Viewers cheered for their favorite teams as players smacked the puck in hopes of a goal.

More than half way through the tournament with The One Times playing Handy Capable, Jimmy John’s Gourmet Subs showed up to delivery 72 mini subs on the house! With food in the players’ bellies, everyone was back on the ice for the last two games.

The final teams to play were The One Times and The Legion with Team Legion taking the the tournament. Each member of Legion was awarded with personalized trophies from Kudos in Harvey! The team consisted of four members, Robert & Joseph Luke and Lynne and Nathan Taurence.

At this time there is no set date for the next Catch the Vision Hockey Tournament, but Marquette Township is hoping to do schedule something for early August during Community Days.

You can stay with Sunny.FM for all the latest news and up coming events for Marquette County!

Check out the success from last year’s Catch the Vision 3 on 3 Street Hockey Tournament! 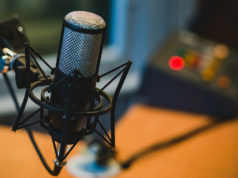 My Favorite Podcasts to Listen to While Staying at Home

Help Your Pet Deal with Fireworks