Negaunee, MI – January 6, 2020 – The Negaunee Miners boys basketball team stayed perfect with a 67-31 win over the Manistique Emeralds on Monday evening in Negaunee.  The Miners carried an impressive record of 4-0 into the matchup, and their record remained unblemished after the final whistle blew.

Negaunee was the team that got on the board first, by virtue of a three-pointer by Chas Kumpula just over a minute into the game.  Alex Munson followed this with a layup shortly thereafter on which he was fouled, and he made the Negaunee lead 6-0 by completing the three-point play.  Drew DuShane put a shot in off the glass, and Drew Lindburg had a steal-and-score on the ensuing Manistique possession.  The Miners kept up the pressure throughout the first quarter, after which they led 26-5.

Negaunee continued their domination in the second quarter, though Manistique was able to quicken their offensive pace a bit.  The Emeralds shot fairly well from the free-throw line, and since the Miners started the quarter with 6 team fouls, Manistique went to the line after each foul of the quarter.  The Miners were fairly well disciplined, though, and were able to extend their lead to 36-12 by halftime.

Negaunee stopped their full court press in the second half, having built themselves a comfortable lead.  Despite this, Manistique was unable to get much going offensively in the third quarter, with Negaunee’s skill on both ends of the court reigning supreme.  After three quarters of play in Negaunee, the Miners led 58-21.

The Miners put their backups in shortly after the fourth quarter began, since the game was not in any doubt.  Negaunee’s subs did well, holding onto the lead that had been built over the previous three quarters through solid offensive play and hustle on defense.  At the final whistle, Negaunee came out the winner by a score of 67-31.

The next game on Sunny 101.9 will be on Tuesday, January 7th, when the Negaunee Miners girls basketball team hosts the Ishpeming Hematites.  That game tips off at 7:15 P.M., so make sure to tune in and catch all the action right here on Marquette County’s Sunny 101.9. 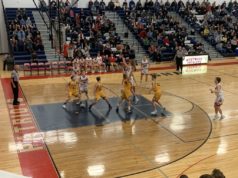 Negaunee Miners came up short against Marquette Redettes in Overtime 72-75.

Protect Your Dog From Heartworm